For your consideration is a near-mint condition early 80's vintage Ovation Model 1617 USA made Guitar.

Made In Connecticut, this beautiful example of American innovation and craftsmanship features diamond mother of pearl Inlay, cedar top, rosewood fingerboard, maple neck, and a great sound, both on and off the amplifier.  The deep-bowl, triple bound body projects sound in a way that even modern guitars can't seem to replicate.  It has a raised sound hole rosette, perfectly preserved chrome sealed tuning machines and has been upgraded with a K&K peizo pickup that takes this instrument up another notch.

The volume and tone control knob is not operational, as the previous owner decided to upgrade to the K&K peizo pickup, but the original pickup is included along with the original case.

Founder Charles Kaman (1919–2011) developed the first Ovation guitar in 1965–1966.  Kaman, an amateur guitarist from an early age, worked on helicopter design as an aerodynamacist at United. Eventually, he founded a helicopter design company, Kaman Aircraft, in 1945.

The Kaman Corporation soon diversified, branching into nuclear weapons testing, commercial helicopter flight, development and testing of chemicals, and helicopter bearings production. In the early 1960s, however, financial problems from the failure of their commercial flight division forced them to expand into new markets, such as entertainment and leisure. Charles Kaman, still an avid guitar player, became interested in making guitars.

From 1966 to 2007 Ovation guitars, and later on Adamas guitars, were a brand of KMCMusicorp, which itself was a subsidiary of Kaman Aircraft.

In 2008 KMCMusicorp (and with that the Ovation brand) was sold to the Fender Musical Instruments Corporation.[9] In 2014 Fender announced that they are closing the iconic Ovation guitar factory in New Hartford, Connecticut, leaving all production of Ovation guitars overseas.[10] Before that announcement Fender established a U.S. production of various acoustic guitars in the New Hartford factory. Alongside Ovation and Adamas guitars, which have been produced there for decades, Fender started a U.S. production of other Fender-owned brands in that factory, as is known, Guild (Guild Guitar Company) and Fender.

Shortly after closing the New Hartford factory it was announced that the Ovation brand has been sold to the company Drum Workshop, alongside a few other previously Fender-owned brands. The announcement was made on January 7, 2015. Aside from the Ovation brand, Drum workshop has also bought the New Hartford factory and reinstated the previously ceased U.S. production of Ovation and Adamas guitars, basses, ukuleles and mandolins.[12]

Research and development of first models 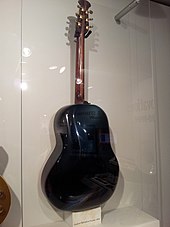 Charles Kaman put a team of employees to work to invent a new guitar in 1964.  For the project, Kaman chose a small team of aerospace engineers and technicians, several of whom were woodworking hobbyists as well. One of these was Charles McDonough, who created the Ovation Adamas model.  Kaman founded Ovation Instruments, and in 1965 its engineers and luthiers (guitar makers) worked to improve acoustic guitars by changing their conventional materials. The R&D team spent months building and testing prototype instruments. Their first prototype had a conventional "dreadnought" body, with parallel front and back perpendicular to the sides. The innovation was the use of a thinner, synthetic back, because of its foreseen acoustic properties. Unfortunately, the seam joining the sides to the thin back was prone to breakage. To avoid the problem of a structurally unstable seam, the engineers proposed a synthetic back with a parabolic shape. By mid-1966, according to Ovation, they realized that the parabolic shape produced a desirable tone with greater volume than the conventional dreadnought.

Once the engineers had settled on a parabolic shape, they turned their attention to developing a substance that could be molded into this bowl-like shape. Using their knowledge of high-tech aerospace composites, they developed Lyrachord, a patented material comprising interwoven layers of glass filament and bonding resin.

The first successful design, built by luthier Gerry Gardner, went into production soon after the company was established.

The first Ovation guitar made its debut in November, 1966. Its Lyrachord body gave the instrument, according to the company, unprecedented projection and ringing sustain.